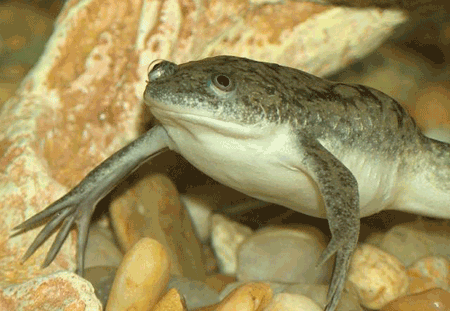 It is caused by Aeromonas hydrophila, Pseudomonas hydrophilus and Proteus hydrophilus. This bacteria attack frogs with weak immune system. Often it can cause ulcers and hemorrhages in the frog’s legs and abdomen. Frogs with red leg disease suddenly die without any warning. This can cause symptoms like skin discoloration, reddening of the legs and belly and mucus production.

The bacteria that cause tuberculosis often enters into the frog’s body from soars or skin wounds that are either open or bleeding once. This disease often affects frogs that are already suffering from other diseases. It affects the major organs of the body and is prevented by maintaining good hygiene.

These are very common among the African clawed frog diseases. Abscesses are observed in the organs, however reddening and ulcers can also be observed on the skin. Fungus can be effectively treated with medications. Even after the treatment, fungus infection may reoccur, but they can be easily controlled with proper treatment and hygiene.

This can cause the collection of large amounts of fluids in the abdomen, legs and chin and gives the frog an appearance of blown up latex rubber glove. This condition makes the dog to stop eating the food because of the fluid pressure on the internal organs. Frog with this disease lives only for a short period of time.

The symptoms of Chlamydia are similar to that of bacterial infection although necrosis of the liver, spleen, kidneys, and heart is also present. This disease can be effectively treated with tetracycline.