Asian elephants are large or huge gray and herbivorous terrestrial animals inhabiting in India, Asian tropical forests and south East Asia. Though the elephants are the largest animals on earth, they are still threatened by human activities. Here are some basic facts of Asian elephants: 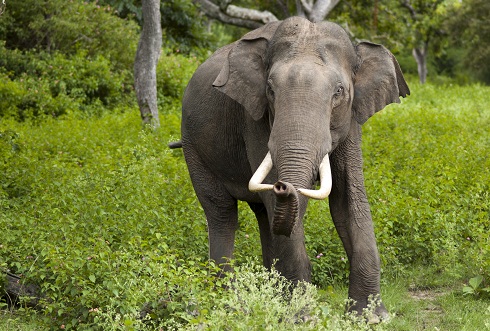 Here are the most interesting Asian elephant facts:

1. The size and weight of Asian elephant: The length of its body ranges from 5.5 to 6.4m, tail length is between 120-150cm and the weight is about 2-5 tones. They live in forests and plains of India and Sri Lanka.

3. Diet: Asian elephants would like to have natural diet like wide variety of vegetation, including grasses and herbs, fruits, bark, leafs and farm crops.

Besides, facts of Asian elephants tell that they also have Zoo diet. At the Zoo, each day an elephant takes 125 pounds of hay, 10 pounds of fruits and vegetables, 10 pounds herbivore pellets and a few leafy branches. Favored foods of elephant are cultivated crops like rice, banana and sugar cane because they tend to drink at least once a day.