Cat kidney failure is also called as chronic renal failure that affects most of the middle to old aged cats. According to the reports, one in every five cats above 15 years of age has kidney failure. Also, cats are three times more at the risk of renal failure than dogs, and there are various symptoms of kidney disease in cats when compared to dogs.

Signs and Symptoms of Kidney Disease in Cats 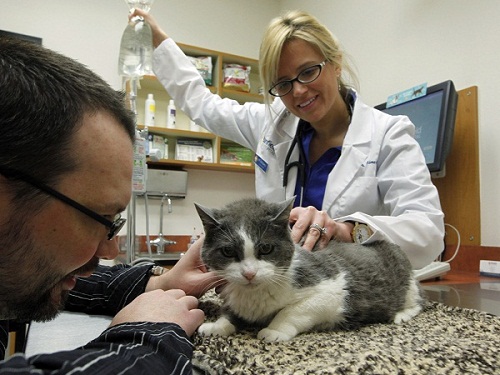 One of the most noticeable symptoms of kidney disease in cats is increased consumption of water. Once you notice these symptoms in your cat, it is the time to get a blood test for cat as these signs indicate the existence of several conditions.

Urinating frequently is the most common sign of cat kidney disease. Frequent urination is due to the inability of the kidney to hold the urine for some time. Usually, cat’s kidneys have large reserve capacity to hold the urine. Also, the symptoms of renal failure are not obvious until 70% of the tissues are non-functional. In some instances, renal failure is also a most important cause of death in older cats.

Most of the older cats can exhibit weight loss due to the metabolic changes with the age. Renal failure and diabetes in cats can also cause weight loss.

Cat depression is mainly due to the major changes in their routine, such as loneliness, loss of companion or family member, or any health related conditions. Particularly older cats are at higher risk of depression. So, you should watch for conditions like kidney failure and diabetes.

Organ disease or a failing organ of detoxification like the kidney or liver will cause vomiting in cats.

Lethargic cats can be inactive, drowsy, and not interested in any surroundings. Acute or chronic kidney failure is one of the most common causes of lethargy in cats.

An abnormally large kidney is one of the most common symptoms of kidney disease in cats, which happens due to the inflammation, infection or cancer of kidneys.

It is also called halitosis, and is caused by build-up of odor producing bacteria in the cat’s mouth. Persistent bad breath can indicate most severe problems in your cat, such as abnormality in kidneys, liver, gastrointestinal tract, respiratory system or mouth.

According to the studies, low levels of potassium may directly affect kidney function and contribute to chronic renal failure. So, giving your cat regular potassium supplements can decrease the condition and also reduce weakness in your cat.

This symptom in cats occurs due to various conditions, such as metabolic disorders, neurologic conditions, and the conditions that affect central nervous system. Chronic renal failure in cats can also cause this symptom.

A Complete Guide to Keeping a Pet Eclectus Parrot

How To Groom & Trim Around A Dogs Eyes

What Can You do to Help Your Dog with Upset Stomach?