When you’re creating a farm, you need to know about the most useful animals for that environment. Whether you’re looking for livestock or companion animals, there are many possibilities – for beginners, low maintenance, for self-sufficiency, for pets, to raise for profit, or miniature animals for a backyard. Here is the best list of farm animals around, with many being the most common.

Horses are the most royal and exciting among all the farm animals. The main purpose of horses is for riding and pulling plows and carts. Prior the inventions of cars, horses were the most well-known means of travelling.

They are the major source of food. Chickens lay eggs, which we can eat.

Goats can be kept in the farm for the purpose of milk, meat and wool. Milk is used to make cheese and wool used for clothing.

It is a male cow used for meat. Bull meat is called as beef.

Cows are survived for the purpose of milk and meat. Cow meat is called as beef.

They are used for riding and pulling heavy weights around. As they are the desert animals, they don’t need much food. 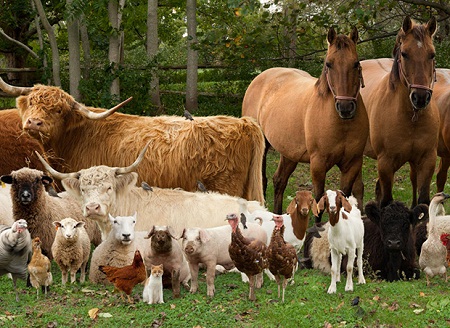 It is a bird among the family of large birds. They are much like duck and swan. They grow smaller than swan and larger than duck.

Pigs are kept in the farms for the purpose of their meat. Pig meat is called as pork.

These are best farm animals that can live on land, water and air.

They are related to goats and mainly used for the purpose of meat and wool.

They are large birds kept in the farms for the purpose of their meat.

They are one of the great companions among the farm animals.

It is a species of wild cattle and they are used as working animals and for their meat.

Camels are the working animals used for the purpose of milk, meat, hair for textiles or goods such as felted pouches.

It is the second largest extant bird in the world use for meat and its feathers. The feathers and eggs are used in decorative arts and crafts

Used for honey, wax and pollination.

it is a domesticated animal widely used as meat and pack animal. It is also used for transportation.

Various species of pigeons can be used as food.

The feathers are used for feather dusters; skin used for cloaks or leather, and their meat is a staple to many people

Yaks are used for milk, meat and wool production

Zebu is used for the purpose of leather, meat, milk, and soil fertilization.

Silkworms are kept in the farms mainly for the production of raw silk.